Some thoughts on eating by Stella Hervey Birrell. She gets more writing done on the fast days!

Today I have been thinking about…five/two. 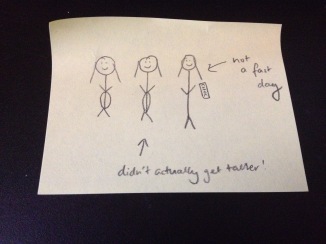 Anyway, I did finally make it along, since the Spring of 2015 I’ve been a committed partygoer/convert.

My weight has gone up, down, up, down, since 1990: what a ride! Lots of things worked but never for a particularly long time. Unless you count psychosis. Which I don’t, by the way.

Brainwashed health-kick bore alert: I love it. It works. In case no one has ever told you before:

Not temporary ones anyway. But five/two is not only effective, it’s sustainable. Just keep to your fast days.

And if that’s not enough, on those days I’m more productive and energetic.

This is the website and blog of tinylifer Stella Hervey Birrell. I'm a writer living in East Lothian, Scotland. My first novel, How Many Wrongs make a Mr Right? was published in 2016. I wanted to start a blog that wouldn’t encroach much into anyone’s day, with a nod to Twitter’s use of brevity as a USP (I use 140 words per post, they used to insist on 140 characters per post). In the blog, I want to mostly focus on the little things, the ones that lift us, keep us going on the difficult days. The visuals will also be deliberately simple: a post-it note with an illustration in pencil (Stella HB, you see?). Thanks for reading!
View all posts by atinylife140 →
This entry was posted in Blog. Bookmark the permalink.